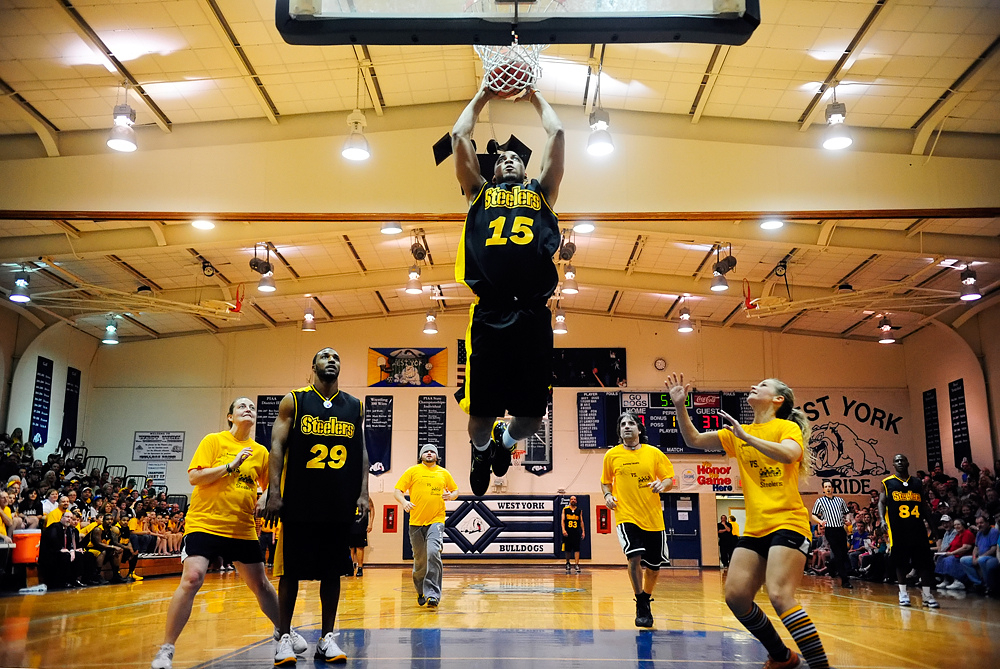 Our training focus and program.
Current Basketball ATHLETES NETWORK Testing Protocol
o Height — a very important attribute for basketball players
o Body mass — used with the vertical jump result to calculate a leg power score.
o Lane Agility Drill — measures how fast a player moves laterally around the key (used in the NBA draft too)
o Standing Vertical Jump — a measure of leg explosive power.
o Kneeling Power Ball Throw — performed like a chest pass while kneeling, this test measures upper body power. It is also called the Chest Launch.
o 3/4 Court Sprint — time to sprint over the distance of three quarters of the court is measured in seconds (used in NBA draft too)
o Multi-Stage Hurdle — a test of agility and lower body strength endurance.
o Max Touch — a basketball specific test that measures maximum touch height, which reflects stature and wingspan with the physical abilities of jump mechanics and explosive leg power.
Previous ATHLETES NETWORK Testing Protocol
The following tests used to make up the assessments in the Basketball , but have been superceded with the tests described above.
o One Step Vertical Jump — jumping for maximum height, this test measures explosiveness, and is a reliable indicator of speed. Requiring a single step approach, this test is best measured using a Vertec though other methods may be used.
o 20 Meter Dash — a straight line sprint test that measures acceleration, and is a reliable indicator of speed, agility and quickness.
o 30 Second Endurance Jump — measures agility and lower body strength endurance
o Overhead Power Ball Throw — The test involves throwing a Power Ball over the head for maximum distance. It measures core strength and total body power (boys use a 3kg ball, girls and youth use 2kg)
o Agility Cone Drill — A lateral movement test that measures the agility of the athlete, particularly body control, lateral speed and ability to change directions.

Lane Agility Drill
The Lane Agility Drill is a test of agility in the basketball player. This test is part of the fitness testing battery for the ATHLETES NETWORK basketball and NBA Draft, and their protocol is listed here.
o purpose: this is a test of speed, body control and the ability to change direction (agility).
o equipment required: stopwatch or timing gates, measuring tape, 6 marker cones, a basketball court.
o procedure: Set up the cones as illustrated in the diagram. The test is based on the pro-sized foul lane (16’ wide x 19’ deep). If using a High School sized court (lane width is only 12 feet) or other non-standard court dimensions, the markers may need to set outside the lane markings. Start with one foot behind the start line, no rocking movement allowed. Hand timing starts from first movement from the set position. Run forwards to the baseline.At the cone, change movement to a side shuffle, and move sideways to the right across the baseline. At the next cone back pedal up the lane to the foul line, then side shuffle left back towards the start line. Here the subject touches the floor at a point even with the starting cone, then reverses direction to return back around the course to complete another revolution. First side shuffle right, forward sprint, side shuffle left then back pedal to complete the test. Remain facing forwards towards the baseline throughout the test. Two trials are allowed.
o scoring: Record the best time to complete the test in seconds to the nearest two decimal places. A foul includes moving or knocking down a cone, cutting a corner of the drill, sprinting sideways instead of defensive-shuffling, crossing your feet, not touching the change-of-direction line, or falling down. The table below lists expected score ranges for players of different positions.

o purpose: The aim of this test is to determine running speed over 3/4 court distance (75 feet, 22.86 meters).
o equipment required: marked basketball court, 4 cones, stopwatch or timing gates.
o procedure: The test involves running a maximum sprint over 3/4 of a basketball court (75 feet or 22.86 meters). Place two cones / timing gates at the baseline and free-throw lane lines, and two cones at the elbows of the opposite free-throw line (see diagram). A thorough warm up should be given, including some practice starts and accelerations (see warming up for sprint testing). Start from a stationary position behind the court baseline, with one foot up to the line (a two-point stance). The tester should provide hints to maximizing speed and encouragement to continue running hard past the finish markers. If using hand timing, the stopwatch should be started with the first movement.
o results: Two trials are allowed, and the best time is recorded to the nearest two decimal places.
o target population: basketball players
o reliability: Timing reliability is greatly improved if timing gates are used.
o comments:
o not all courts are the same length. Measure the court distance to confirm that the 3/4 distance is equal to 75 feet.
o for safety, you may wish to place crash pads against the wall at the far end of the court.

Agility Cone or Compass Drill
The Agility Cone Drill is a lateral movement test that measures the agility of the athlete, especially body control and change of direction.
o purpose: this is a test of speed, explosion, body control and the ability to change direction (agility).
o equipment required: stopwatch or timing gates, measuring tape or or chalk, 5 marker cones, a flat non-slip surface.
o procedure: The cones are laid out as per the diagram, with four marker cones placed in a diamond shape, and one in the middle. The outer cones are each placed 3 meters from the center. The player crouches behind and with their left hand on the middle cone, facing forwards (towards cone 5). The player then turns and runs to the right and touches the cone (2) with their hand. They then turn back and run to the center cone, out to the next cone (3), back to the center, out to the next cone (4), back to the center and then finally turn and finish by running through the finish line at cone 5. The player is required to touch the cone with their hand at each turn. Timing starts when the hand comes off the center cone, and stops when the chest passes through the line of the final cone. Rest for three minutes, then repeat the drill, moving in the opposite direction (counterclockwise, cones in order 1-4-3-2-5).

20 Meter Dash
Sprint or speed tests can be performed over varying distances, depending on the factors being tested and the relevance to the sport. The 20 Meter Dash is part of the SPARQ rating system for Basketball and Soccer, and their protocol is listed here.
o purpose: The aim of this test is to determine acceleration, and also a reliable indicator of speed, agility and quickness.
o equipment required: measuring tape or marked track, stopwatch or timing gates, cone markers, flat and clear surface of at least 40 meters.
o procedure: The test involves running a single maximum sprint over 20 meters, with the time recorded. A thorough warm up should be given, including some practice starts and accelerations. Start from a stationary position, with one foot in front of the other. The front foot must be on or behind the starting line. This starting position should be held for 2 seconds prior to starting, and no rocking movements are allowed. The tester should provide hints to maximizing speed (such as keeping low, driving hard with the arms and legs) and encouraged to continue running hard past the finish line.